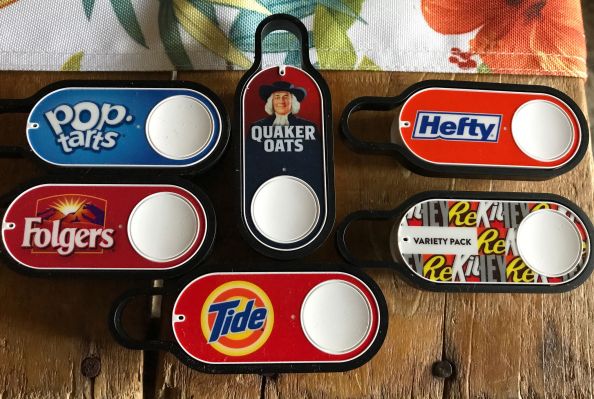 Amazon has confirmed it’s retired physical stick-on Dash buttons from sale — in favor of virtual alternatives that let Prime Members tap a digital button to reorder a staple product.
It also points to its Dash Replenishment service — which offers an API for device makers wanting to build Internet connected appliances that can automatically reorder the products they need to function — be it cat food, batteries or washing power — as another reason why physical Dash buttons, which launched back in 2015 (costing $5 a pop), are past their sell by date.
Amazon says “hundreds” of IoT devices capable of self-ordering on Amazon have been launched globally to date by brands including Beko, Epson, illy, Samsung and Whirlpool, to name a few.
So why press a physical button when a digital one will do? Or, indeed, why not do away with the need to push a button all and just let your gadgets rack up your grocery bill all by themselves while you get on with the importance business of consuming all the stuff they’re ordering?
You can see where Amazon wants to get to with its “so customers don’t have to think at all about restocking” line. Consumption that entirely removes the consumer’s decision making process from the transactional loop is quite the capitalist wet dream. Though the company does need to be careful about consumer protection rules as it seeks to excise friction from the buying process.
The ecommerce behemoth also claims customers are “increasingly” using its Alexa voice assistant to reorder staples, such as via the Alexa Shopping voice shopping app (Amazon calls it ‘hands free shopping’) that lets people inform the machine about a purchase intent and it will suggest items to buy based on their Amazon order history.
Albeit, it offers no actual usage metrics for Alexa Shopping. So that’s meaningless PR.
A less flashy but perhaps more popular option than ‘hands free shopping’, which Amazon also says has contributed to making physical Dash buttons redundant, is its Subscribe & Save program.
This “lets customers automatically receive their favourite items every month”, as Amazon puts it. It offers an added incentive of discounts that kick in if the user signs up to buy five or more products per month. But the mainstay of the sales pitch is convenience with Amazon touting time saved by subscribing to ‘essentials’ — and time saved from compiling boring shopping lists once again means more time to consume the stuff being bought on Amazon…
In a statement about retiring physical Dash buttons from global sale on February 28, Amazon also confirmed it will continue to support existing Dash owners — presumably until their buttons wear down to the bare circuit board from repeat use.
“Existing Dash Button customers can continue to use their Dash Button devices,” it writes. “We look forward to continuing support for our customers’ shopping needs, including growing our Dash Replenishment product line-up and expanding availability of virtual Dash Buttons.”
So farewell then clunky Dash buttons. Another physical push-button bites the dust. Though plastic-y Dash were quite unlike the classic iPhone home button — always seeming temporary and experimental rather than slick and coolly reassuring. Even so, the end of both buttons points to the need for tech businesses to tool up for the next wave of contextually savvy connected devices. More smarts, and more controllable smarts is key.
Amazon’s statement about ‘shifting focus’ for Dash does not mention potential legal risks around the buttons related to consumer rights challenges — but that’s another angle here.
In January a court in Germany ruled Dash buttons breached local ecommerce rules, following a challenge by a regional consumer watchdog that raised concerns about T&Cs which allow Amazon to substitute a product of a higher price or even a different product entirely than what the consumer had originally selected. The watchdog argued consumers should be provided with more information about price and product before taking the order — and the judges agreed. Though Amazon said it would seek to appeal.
While it’s not clear whether or not that legal challenge contributed to Amazon’s decision to shutter Dash, it’s clear that virtual Dash buttons offer more opportunities for displaying additional information prior to a purchase than a screen-less physical Dash button. So are more easily adaptable to any tightening legal requirements across different markets.
The demise of the physical Dash was reported earlier by CNET.