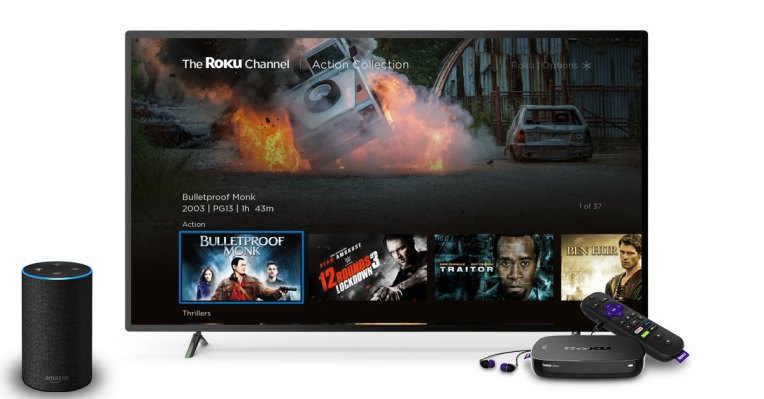 Roku this morning announced its devices will now be compatible with Amazon’s Alexa. Through a new Roku skill for Alexa, Roku owners will be able to control their devices in order to do things like launch a channel, play or pause a show, search for entertainment options and more. Roku TV owners will additionally be able to control various functions related to their television, like adjusting the volume, turning on and off the TV, switching inputs and changing channels if there is an over-the-air antenna attached.
The added support for Amazon Alexa will be available to devices running Roku OS 8.1 or higher, and will require that customers enable the new Roku skill, which will link their account to Amazon.
Roku has developed its own voice assistant designed specifically for its platform, which is available with a touch of a button on its voice remote as well as through optional accessories like its voice-powered wireless speakers, tabletop Roku Touch remote or TCL’s Roku-branded Smart Soundbar. However, it hasn’t ignored the needs of those who have invested in other voice platforms.
Already, Roku devices work with Google Assistant-powered devices, like Google Home and Google Home Mini, through a similar voice app launched last fall.
Support for the dominant streaming media platform — Amazon Alexa — was bound to be next. EMarketer said Amazon took two-thirds of smart speaker sales last year, and CIRP said Echo has a 70 percent U.S. market share.
The Roku app will work with any Alexa-enabled device, including the Amazon Echo, Echo Show, Echo Dot, Echo Spot and Echo Plus, as well as those powered by Alexa from third parties, the company confirmed to TechCrunch.
Once enabled, you’ll be able to say things like “Alexa, pause Roku,” or “Alexa, open Hulu on Roku,” or “Alexa, find comedies on Roku,” and more. The key will be starting the command with “Alexa,” as usual, then specify “Roku” is where the action should take place (e.g. “on Roku”).
One change with the launch of voice support via Alexa is that the commands are a bit more natural, in some cases. Whereas Google Assistant required users to say “Hey Google, pause on Roku,” the company today says the same command for Alexa users is “Alexa, pause Roku.” That’s a lot easier to remember and say. However, most of the other commands are fairly consistent between the two platforms.
“Consumers often have multiple voice ecosystems in their homes,” said Ilya Asnis, senior vice president of Roku OS at Roku, in a statement about the launch. “By allowing our customers to choose Alexa, in addition to Roku voice search and controls, and other popular voice assistants, we are strengthening the value Roku offers as a neutral platform in home entertainment.”